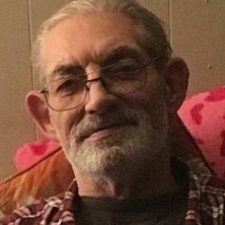 Alan D. Rinehimer, Sr. (Alleyoop), 60, of West Pittston, passed away on Tuesday, April 28, 2020, at the Wilkes-Barre General Hospital after a brief illness.

Alan was born in Wilkes-Barre, a son of Betty Lou Hinz Rinehimer and the late Samuel F. Rinehimer. Alan attended Wilkes-Barre Area Schools. He was employed by George Belanchik Fencing and Lipfert Fencing prior to starting his own fencing business, Al Rinehimer Fencing, which he ran with his son and best friend, Alan Jr.

Alan enjoyed fishing, and he also enjoyed watching and attending NASCAR races with his family, cheering on his favorite, Dale Earnhardt Sr. Alan enjoyed going to the Infamous Vape Shop where they were very kind to him. Alan always had his dedicated, loving, second best friend, “Shiloh,” with him wherever he went. Shiloh was Alan’s shadow, and she will miss him dearly.

In addition to his father, Alan was preceded in death by his maternal and paternal grandparents, and his aunts and uncles.

Alan is survived by his mother, Betty Lou Rinehimer; his friend and ex-wife, Jacqueline Mirin-Deutsch; daughters, Jennifer Lynn Cunningham and her husband, Christopher, and Jacqueline Jean Rinehimer-Bolt; his one and only son and best friend, Alan Dale Rinehimer, Jr., who will miss him dearly; the little loves of his life, whom he loved dearly, his grandchildren: Hailey (Hoo Hoo), Chase (Chasers), Jacob Bolt, and Dakota Douglas; sisters, Deborah Evans and Samantha Rinehimer;  several aunts, uncles, cousins; and numerous nieces and nephews.

The family would like to extend their many thanks to Dr. Martino, Dr. Ellis, and the ICU staff at the Wilkes-Barre General Hospital for the care and concern they provided to Alan and his family this past week.

Interment will be in Stairville Cemetery in Dorrance Township.

Online condolences can be sent by visiting Alan’s obituary at www.natandgawlas.com.