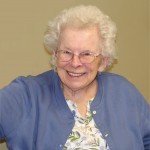 Aldona was born in Wilkes-Barre, the daughter of the late Peter and Marcella Jancaitis Balukonis. She was a graduate of Meyers High School, Class of 1935. Prior to her retirement, Aldona was employed by the Social Security Administration as a data processor.

Aldona was a member of the Albright United Methodist Church, in Wilkes-Barre.

Aldona’s positive outlook, her giving spirit and her love of music, especially her piano, brought joy to everyone she knew.

In addition to her parents, Aldona was preceded in death by her daughter, Marie Elena Smith in 2006, and by her brothers Frank Balcon and Peter Balukonis.

Aldona’s family would like to thank the staff of Timber Ridge, especially on the Aspen Unit, where she received loving and compassionate care. The Aspen staff were like family.

Funeral services will be private. There will be no calling hours.

Interment will be in Lithuanian Independent Cemetery, West Wyoming.

Online condolences can be sent by visiting Aldona’s obituary at www.natandgawlas.com.