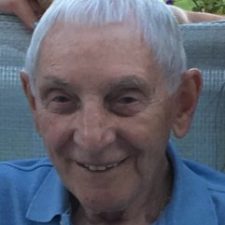 Angelo C. Berrettini, 92, of Wilkes-Barre passed away on Wednesday at his home surrounded by his loving family.

He was born in Pittston Township, a son of the late Vincenzo and Adelinda Moroni Berrettini.  Angelo was a graduate of Pittston Township High School and proudly served with the U.S. Navy, during World War II.

Prior to his retirement, Angelo was employed as a butcher for Acme Markets and later at Harry’s Market.  He was a member of Holy Rosary Church in Wilkes-Barre, prior to its closing.

Angelo was a kind and generous man.  His greatest joy was his family.  He especially loved preparing Sunday dinners for them.

Angelo’s family would like to thank the Residential Hospice team for their great care and compassion, during his illness.

A Mass of Christian Burial will be held on Monday at 10 am in St. Robert Bellarmine Parish, Barney and Division Streets, Wilkes-Barre.  Interment will be in St. Mary’s Cemetery, Hanover Township.

Family and friends may call from 9 – 10 am on Monday at the church.

Condolences may be sent by visiting Angelo’s obituary at www.natandgawlas.com.