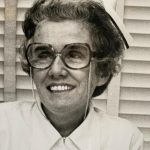 Born on February 12, 1927, Ann Marie was the daughter of the late James and Elizabeth (McKeown) Brislin of the East End section of Wilkes-Barre.  She graduated from St. Mary’s High School in 1945 and the Mercy Hospital School of Nursing in 1948.  Ann Marie obtained her BSN from College Misericordia in 1958 and earned her Masters of Science in Education, Public Health Administration from the University of Pennsylvania in 1962.

Ann Marie was a member of Holy Savior Parish until its closure and St. Nicholas Church in Wilkes-Barre.  She was a devout Catholic and attended daily Mass. Her family is very appreciative of Lori at River Run who said the Rosary daily with Ann Marie during her stay there.  Ann Marie lived her faith and was known as a woman of kindness and charity.  Ann Marie was always the consumate nurse, putting all others before herself and taking care of those around her. She enjoyed spending time with family, especially family gatherings with her sister Margaret, late cousin Charlie McKeown, his wife Theresa, and their children, Maureen, Charlie, Molly and Molly’s daughter Abigail. She was extremely fond of dinners at The Bear Creek Inne where the Eddowes and their daughter Denise Love became more than hosts, but close friends whom she considered family. One of her great joys in life was spending time with Denise ‘s daughter, Amy Love, watching her grow from an infant to an adult and dear friend.

In addition to her parents, Ann Marie was preceded in death by her infant brother John Brislin and brother James F. Brislin.  She is survived by her sister Margaret Brislin, Godson William Hillanbrand of Allentown, First Cousin Michael J. McKeown of Stroudsburg, numerous cousins, and friends.

A Mass of Christian Burial will be celebrated on Monday, January 18, 2021 at 10:00 at St Nicholas RC Church 226 S. Washington St. Wilkes-Barre.  Interment will be in St. Mary’s Cemetery, Hanover Township.

Condolences may be sent by visiting Ann Marie’s obituary at www.natandgawlas.com.