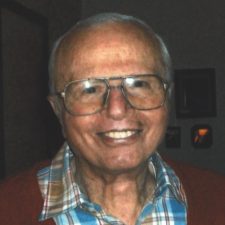 Tony was born in Scranton, a son of the late Joseph and Angela Damiano Amendola. He was a graduate of Hanover Township High School and Mansfield Teacher’s College. Tony was employed for many years in New Jersey, where he was an English teacher at Thorne Junior High School. While living in New Jersey, he was president of Oceanic Hook and Ladder Fire Company #1 and also volunteered as a fire police.

Tony was a U.S. Marine Corps veteran, serving in the Pacific Theater during World War II.

Following his retirement from teaching, he returned to the Wilkes-Barre area. He was a member of St. Andrew Parish in Wilkes-Barre.

Tony was a sports enthusiast. He especially enjoyed watching the New York Yankees and any tennis match that he could find on television. Tony also enjoyed playing tennis, which he did three times a week up until he was 83 years old.

Condolences may be sent by visiting Tony’s obituary at www.natandgawlas.com.