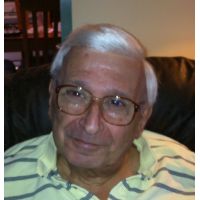 Born in Wilkes-Barre on April 21, 1937, he was a son of Harry Thomas and Sarah Isaac Thomas. Tony was a 1954 graduate of G.A.R. Memorial High School. At a young age, he was employed at the YMCA in Wilkes-Barre. He then served as a State Farm Life Insurance agent and later became a restaurant manager at numerous local restaurants. He and his son Tony operated Tony Thomasâ€™s Deli in Wilkes-Barre for many years. Tony was later employed by the Wilkes-Barre Area School District as a Security Greeter at various schools.

In addition to his parents, he was preceded in death by a brother, Mickey Thomas.

Divine Liturgy will be celebrated on Saturday, April 2, 2016, at 10 a.m. at St. Anthonyâ€™s Maronite Catholic Church, Park Avenue in Wilkes-Barre. Family and friends are asked to go directly to the church for the services.

In lieu of flowers, memorial donations may be made to The Knights of Lebanon Education Fund, PO Box 432, Wilkes-Barre, PA 18702.