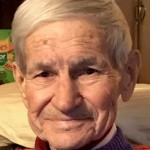 Bernard Daniel Shinal, 88, of Bear Creek Township, who lived his first 60 years in his hometown of Wilkes-Barre Township, passed away peacefully at the Smith Health Care facility in Mountain Top, on Sunday, March 1, 2020.

Bernie was a graduate of Wilkes-Barre Township High School, class of 1949. From 1973 to 1991, he ran the HVAC unit as a member of the maintenance department for the former Mercy Hospital in Wilkes-Barre. He was a union shop steward for Local Chapter 1199. During the 1960’s, Bernie was the eastern Pennsylvania sales representative for the Brother Sewing Machine Company and later the Morris Sewing Machine Company. He won several national sales contests by selling to buyers wherever he found them, including Amish and other farmers for whom he would replace the new machine’s motor with an old-fashioned foot pedal, out of respect for their religious beliefs.

Bernie, as friends and family called him, had several long-term, successful and varied careers, most recently as the caretaker for the Georgetown Settlement Camp, a position he held for 20 years.

Bernie was a lifelong fan of the outdoors and sports, especially baseball. He managed and played on area softball teams which won several league championships in the 1970’s . Bernie was a head little league coach for many years at the former St. Joseph’s Youth League in Wilkes-Barre Township and he was a member of the Georgetown Friar’s Club.

In his later years, when not working or selling items among friends at the Blakeslee Corners Flea Market, Bernie spent most of his time and energy on his family, including his children and many grandchildren, with whom he corresponded frequently.

Friends may call on Sunday from 3 – 6 pm at the funeral home.

Memorial donations may be made in Bernie’s memory to the SPCA of Luzerne County, 524 E. Main Street, Wilkes-Barre, PA 18702.

Online condolences may be sent by visiting Bernie’s obituary at www.natandgawlas.com.