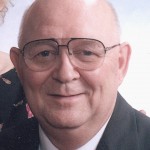 Charles Cherkauskas, 75, of Wilkes-Barre Township, passed away on Wednesday, September 5, 2018, at his home.

He was born in Wilkes-Barre, a son of the late John and Louise Thomas Cherkauskas.  Charles was a 1961 graduate of Meyers High School.  He served with the United States Coast Guard from 1961 to 1967.

Prior to his retirement he had been employed by Metropolitan Wire for many years. Charles was an avid outdoorsman and fisherman.

He was preceded in death by his son, Donald Bachman, and by an infant brother, David Cherkauskas.

Funeral Services will be held on Saturday at 9 am from the Nat & Gawlas Funeral Home, 89 Park Avenue, Wilkes-Barre, with a Mass of Christian Burial to follow at 9:30 am in Our Lady of Fatima Parish at St. Mary’s Church of the Immaculate Conception, 134 S. Washington Street, Wilkes-Barre.  Interment will be in St. Mary’s Cemetery, Hanover Township.

Friends may call on Friday from 5 – 7 pm at the funeral home.

Online condolences may be sent by visiting Charles’ obituary at www.natandgawlas.com.