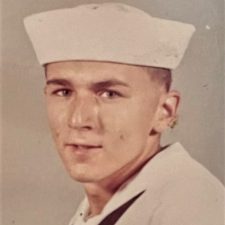 He was born November 4, 1947 in Kingston, a son of the late Joseph and Margaret Derzak Adzema.  Chuck was a graduate of GAR High School 1965 and furthered his education at Arizona State University.

He was proud of his veteran status as a member of the United States Navy during the Vietnam era, where he fell in love with the sunshine of the west coast. Chuck enjoyed traveling, spending time with his family, story-telling, Coronado beach, and had a passion for oldies music. His signature look consisted of shorts, flip flops, and sunglasses, regardless of the weather.

Prior to his retirement, Chuck worked as a Light Rail Vehicle Operator for the San Diego Trolley and in telecommunications for Bell Atlantic.  Chuck was a life member of the American Legion.

In addition to his parents, he was preceded in death by his brother Joseph Adams and his Godson and nephew Christopher C. Lewis.

A Mass of Christian Burial will be held on Monday at 9 A.M. in St. Nicholas Church, 226 S. Washington Street, Wilkes-Barre. Those who are attending the funeral are asked to go directly to the church. Interment will be in St. Peter and Paul Greek Catholic Cemetery in Mount Carmel, where military honors will be accorded by the United States Navy.

Relatives and Friends may call on Sunday from 3-6 P.M. at the Nat & Gawlas Funeral Home, 89 Park Avenue, Wilkes-Barre.

In lieu of flowers, memorial donations can be made to Folds of Honor Foundation Department 1‌3, Tulsa, O‌K 74‌182 or by visiting https://foldsofhonor.org.

Condolences can be sent by visiting Chuck’s obituary at www.natandgawlas.com.