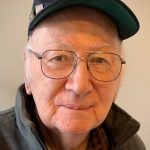 Charles was born in Wilkes-Barre, a son of the late Peter and Dorothy Runski Schilling. He attended St. Nicholas High School. Charles was a proud U.S. Army veteran serving during World War II in the European Theater. Prior to his retirement, he was employed for many years as a printer by Wilkes-Barre Publishing Company/Times Leader.

Charles was a member of St. Andrew’s Parish in Wilkes-Barre. He was also a member of the Disabled American Veterans.

He was preceded in death by his wife of 48 years, Yolanda Burginia Schilling, and by his brother William Schilling.

A Mass of Christian Burial will be held on Friday at 10 AM in St. Andrew Parish, 316 Parrish Street, Wilkes-Barre. Interment will be in St. Mary’s Cemetery, Hanover Township.

Friends may call on Friday at the church from 9-10 AM.

In lieu of flowers, memorial donations can be made in Charles’s name to St. Jude Children’s Research Hospital, 501 St. Jude Place, Memphis, TN 38105-9959.

Condolences can be sent by visiting Charles’ obituary at www.natandgawlas.com.