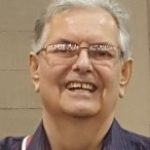 Charlie was born in Pittston, the son of the late Charles and Grace Falcon DeFrancesco. He was a graduate of G.A.R. High School, class of 1964 and graduated in 1970 with a BA in Psychology from King’s College, Wilkes-Barre. He started working at Balester Optical while at King’s College. In 1976 he began his career as Youth Development Counselor with the Commonwealth of PA Department of Public Welfare. He worked within the juvenile justice system counseling delinquent youths. Charlie retired as a Youth Developmental Counselor Supervisor in 2002.

Charlie was a boy scout as a young boy and attained the rank of Eagle Scout. He was a member of the United States Coast Guard Auxiliary since 1982. He taught several levels of boating safety classes and conducted USCGA UX vessel safety checks. Charlie spent time as the commander of the local Flotilla 13-03 and also held other offices. He had a great appreciation for the art of knots.

Charlie enjoyed sailing, summer weather, the beach, playing the guitar, shooting sports, and movies. He also enjoyed all the crazy adventures his wife and daughters could persuade him with, as he was a “Trekkie” and lived by “To explore strange new worlds” and “Go where no man has gone before.”

Funeral services will be held on Friday at 9:30 am from the Nat & Gawlas Funeral Home, 89 Park Avenue, Wilkes-Barre, with a Mass of Christian Burial to follow at 10 AM at St. Nicholas Church, 226 S. Washington Street, Wilkes-Barre. Interment will be in St. Mary’s Cemetery, Hanover Township.

Those attending the visitation and mass are required to wear a mask and abide by social distancing requirements.

In lieu of flowers, memorial donations may be made to Host for Hospitals, 215-472-3801, www.HostForHospitals.org or to St. Nicholas Church Building Fund, 226 S. Washington Street, Wilkes-Barre, PA 18701.

Condolences may be sent by visiting Charlie’s obituary to www.natandgawlas.com.