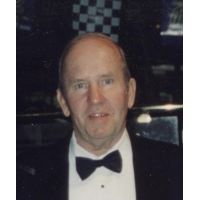 Chick was a proud Army Veteran of the Korean War, serving in Germany as a tank driver with the 6th Calvary. He loved his country with complete devotion and could always be seen at parades and events commemorating its history and independence.

He was employed as a drill operator in the mining industry for 33 years and he was later employed by H.P.G. International, Mountaintop from where he retired in 1997.

He was a member of the American Legion Post 815, Wilkes-Barre Township, the Knights of Columbus Council 302, Wilkes-Barre, and the United Mine Workers of America.

Chick was commissioner of baseball of the St. Josephâ€™s Youth League for several years. He was an avid Steelers fan and enjoyed going to the casino and playing the lottery. Above all, his greatest joy was his family. Chick was a very loving family man and completely selfless. He delighted in his grandchildren, Chrissy, Becky and Charlie and loved attending their various sporting events.

He will be remembered and most deeply missed for his unrelenting generosity and immeasurable contributions to his family, friends and community. His random acts of kindness touched the most unsuspecting of individuals. He had a remarkable spirit, the kindest of hearts and the gift to share them with everyone.

He was preceded in death by his brother, Frank Revitt; sisters, Nancy Revitt and Margaret DeFalco.

Funeral Services with Military Honors will be held on Wednesday at 10:30 am from the Nat & Gawlas Funeral Home, 89 Park Avenue, Wilkes-Barre, with a Mass of Christian Burial to follow at 11am in St. Nicholas Church 226 South Washington Street, Wilkes-Barre. Interment will be in Holy Trinity Cemetery, Bear Creek.

Friends may call on Tuesday from 5-8 pm at the funeral home.

In lieu of flowers, memorial contributions may be made to St. Nicholas Church,
226 South Washington Street, Wilkes-Barre.