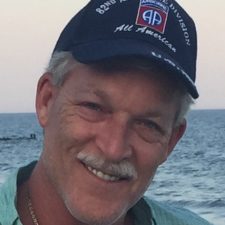 Daniel Lee English, 64, of Mountain Top, went to be with our Lord on Wednesday, April 20, 2022, at his home surrounded by his family.

He was born in Bloomsburg on March 1, 1958, to the late Charles and Shirley Fairman English. He was a 1976 graduate of Central Columbia High School. Dan then served in the United States Army as a member of the 82nd Airborne stationed in Fort Bragg, NC. He also gained his wings in Italy. In 1985, Dan graduated from Bloomsburg University with a Business Management & Marketing degree. In May of that year, he married the love of his life, Jill Bennett.

Dan was employed as a financial planner by Prudential Investments until 1997, when he created his own financial company, English Financial.

Dan was a member of Christ United Methodist Church, Mountain Top. He loved spending time with his family and friends, especially his four grandchildren, who were the light of his world.

Dan was preceded in death by his brothers, Stephen and Scott English, and by his nephew Justin Martincic.

Jill and Cameron would like to express their sincere appreciation to everyone who cared for Dan at the Wilkes-Barre V.A. Hospital and to all those who showed compassion during his struggle.

Funeral services will be held on Monday at 1:30 pm from the Nat & Gawlas Funeral Home, 89 Park Avenue, Wilkes-Barre.  His Pastor, Rev. J.P. Bohanan will officiate.

A visitation will be held on Monday from 12 pm to 1:30 pm at the funeral home, prior to the service.

In lieu of flowers, memorial donations can be made in Dan’s name to CDE Rescue, 95 S. Main Street, Wilkes-Barre, PA 18701.

Condolences can be sent by visiting Dan’s obituary at www.natandgawlas.com.