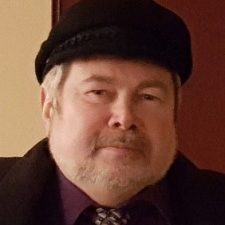 David Bobyak, 62, of Laurel Run, passed away unexpectedly on Thursday, October 7, 2021 at the Wilkes-Barre General Hospital.

He was born in Wilkes-Barre Township, a son of the late Joseph and Rita Kerlavage Bobyak. He was a graduate of Coughlin High School, Class of 1977. He was previously employed at McCarthy Tire and Ellis Coffee, and he was currently employed at Onvo.

David was a member of Future Farmers of America, “ABATE” American Bikers Aimed Toward Education, the NRA, and the Laurel Run Volunteer Fire Department. He enjoyed the outdoors, sitting by the campfire while listening to the Doors, and just mellowing out and enjoying life.

He was preceded in death by his sister, Judith, and by his brother, Joseph.

Surviving are his loving wife and best friend of 14 years, Tanya Hidock Bobyak, whom he had known for 48 years; mother-in-law, Carla; furry friends Ben, Sheba and Tigger; sisters, Debbie, Anna, Cecelia and Mary; brother, Paul; nephews, TJ, Joey and Michael; and several other nieces and nephews.

David will be missed by all. He was the kindest, most caring person who would do anything for anyone. He never hesitated to help a neighbor or friend in need.

Friends may call on Tuesday from 5-7 PM at the Nat & Gawlas Funeral Home, 89 Park Avenue, Wilkes-Barre. A celebration of life will be held at a later date.

In lieu of flowers, memorial donations can be made to the SPCA of Luzerne County, 524 E. Main Street, Wilkes-Barre, PA 18702

Condolences can be sent by visiting David’s obituary at www.natandgawlas.com.