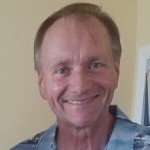 He was born in Wilkes-Barre, son of David E. and Patricia Burke Searfoss of

Wilkes-Barre. He was a 1982 graduate of G.A.R. Memorial High School and attended Luzerne County Community College. He was a Navy veteran, serving aboard the USS America. He retired from employment as a Corrections Officer at the State Correctional Institute in Dallas.

David was a positive role model and dependable leader as an Assistant Scout Master of Boy Scout Troop #154 in Kingston. Prior to that, he was a Den Leader at Cub Scout Pack #100 in Plains. He also was a member and Post Commander of the American Legion Post #132. David was a member of the North End Slovak Citizens Club, Wilkes-Barre. He was an avid runner and competed in many triathlons, the annual Run For The Diamonds, and community 5K races. He was a great fan of Penn State football, the Philadelphia Eagles, and the Philadelphia Phillies. His favorite hobbies were going to antique shops, auctions, and collecting sports memorabilia. He enjoyed spending time with his family at Knoebels and vacationing in Walt Disney World.

Memorial services will be held Saturday, February 1, 2020 at 6 pm from the Nat & Gawlas Funeral Home, 89 Park Avenue, Wilkes-Barre. Rev. Timothy Alleman, Rector of St. Stephen’s Pro Episcopal Cathedral, Wilkes-Barre, will officiate. Private interment will be at the convenience of the family.

Family and friends may visit from 4 – 6 pm Saturday, February 1st at the Funeral Home.

In lieu of flowers, memorial contributions may be made in David’s name to Northeastern PA Council Boy Scouts of America, 72 Montage Mountain Road, Moosic, PA 18507.

Online condolences may be sent by visiting David’s obituary at www.natandgawlas.com.