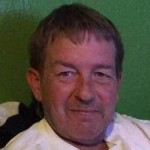 David J. Picketts, 55, of Wilkes-Barre, passed away on Friday in the Wilkes-Barre General Hospital.

He was born in Wilkes-Barre, a son of the late Albert Picketts and Nancy (Joseph) Salerno and his step-father, Richard Salerno, of Plains.  Dave was a 1982 graduate of Coughlin High School.  He was employed as a painter at Delikat Painting for many years.

Dave was an avid hunter and outdoorsman.  Most of all he was a loving father and pop pop.

He was preceded in death by his loving wife, Amanda Delikat Picketts on March 25, 2009.

In addition to his mother, he is survived by his daughter, Avery Picketts and her fiancé, Roan Eddy Sr., Wilkes-Barre; grandchildren, Scarlett Amanda Picketts and Luca David Theodore Eddy; mother-in-law, Irene Delikat; brother, Alan Picketts and his wife, Sandy, Plains; sister, Lisa Lepore, Plains;  and by several nieces and nephews.

Private funeral services will be held at the convenience of the family.  Interment will be in Holy Trinity Cemetery, Bear Creek Township.

Online condolences may be sent by visiting Dave’s obituary at www.natandgawlas.com.