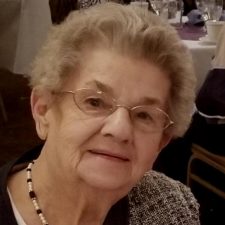 Dolores (Dolly) Wallace, age 90, died peacefully while visiting her son and daughter-in-law in Alabama, a few weeks after realizing her dream of attending a University of Alabama football game.

She was born in Wilkes-Barre on June 22, 1929, to the late Lawrence and Barbara Kaiser Dress. She graduated from St. Nicholas High School in 1947.

Dolly was deeply devoted to her Catholic faith and volunteered for St. Aloysius Parish (nee St. Robert Bellarmine) for over 60 years. She taught CCD, served as a Eucharist Minister, choir member, cafeteria worker, member of the Mother’s Guild and Altar and Rosary Society, serving as President several times, even in her late 80s. She was also in charge of fundraisers including the flea market and spaghetti dinner.

Dolly was a professional seamstress, and in addition to sewing wedding dresses and attendant gowns, prom dresses, suits, and special occasion clothing, she sewed baptismal and communion dresses. She shared her sewing talents not only with her family and friends, but also with the Church, making banners, baptismal bibs, vestments, altar cloths, costumes for the Passion play, and dressing dolls for the bazaar. Dolly also made quilts and designed crafts.

Dolly was an avid fiction and mystery reader and enjoyed attending Sight and Sound theater performances. She also loved to travel.

A Mass of Christian Burial will be held on Monday at 10am in St. Robert Bellarmine Parish at St. Aloysius Church, Barney and Division Streets, Wilkes-Barre. Interment will be in St. John’s Cemetery, Dallas.

In lieu of flowers, donations may be made to Hospice of the Sacred Heart, Hospice of West Alabama, American Brain Tumor Assn, or to the Parsippany Library for the fiction book collection.

Funeral arrangements have been entrusted to the Nat & Gawlas Funeral Home, 89 Park Avenue, Wilkes-Barre. Online condolences may be sent by visiting Dolly’s obituary at www.natandgawlas.com.