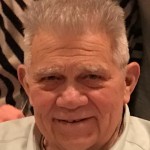 Dominick Aufiero, 83, of Mountain Top, passed away on Thursday in the Wilkes-Barre General Hospital.

He was born in Wilkes-Barre, a son of the late Frank and Elinor (Chicknosky) Aufiero.  Dominick was a 1953 graduate of G.A.R. Memorial High School and he received a degree in civil engineering from Penn State University.

Dominick was a Marine Corps veteran serving during the Korean War and a member of the local U.S. Marine Corps League in White Haven.

He began his civil engineering career with the National Geological Survey and was later employed by Addy Asphalt, Slusser Brothers and lastly, Evans Asphalt.  He also served as a board member for the Wright Township Sanitary Authority.

Dominick was a member of St. Jude Parish in Mountain Top.  He enjoyed playing cards at the Keystone Club.  He was an avid outdoorsman, who loved to hunt and fish. He shared a hunting cabin in Bradford County with a group of friends and enjoyed many hunting and fishing trips.

He was preceded in death by his wife, Martina Degnan Aufiero in 2018 and by his brother, Joseph Aufiero in 1998.

A Mass of Christian Burial will be held at 10 am on Tuesday at St. Jude Church, 420 S. Mountain Blvd. (Route 309), Mountain Top.  Family and friends attending the Mass are asked to go directly to the church on Tuesday.

In lieu of flowers, memorial donations may be made to the White Haven Marine Corps League #1039, 3 VFW Road, White Haven PA 18661.

Online condolences may be sent by visiting Dominick’s obituary at www.natandgawlas.com.