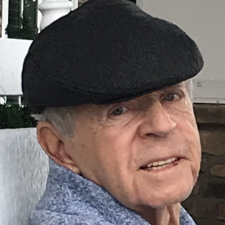 He was born in Wilkes-Barre, PA on May 23, 1933, the son of the late Joseph and Mary Hayes Marx.  Donald proudly served his country in the United States Army during the Korean War.

Funeral services will be held on Tuesday at 10:00 A.M. from the Nat & Gawlas Funeral Home, 89 Park Avenue Wilkes-Barre, followed by a Mass of Christian Burial at 11:00 A.M. in Our Lady of Victory Church, 16 2nd Street Harvey’s Lake. Interment will be in St. Mary’s Cemetery, Hanover Township.

His love of Harvey’s Lake, Boating, Dancing, Laughter and Harrassing those around him was only surpassed by his love for his family and helping others.

The family would also like to take this time to express their overwhelming appreciation to a very dear family friend, Debbie Owen, for the unending care, devotion and love that was given to Don during last years.

In lieu of flowers, memorial donations may be made in Donald’s memory to Our Lady of Victory Church, 16 2nd Street, Harvey’s Lake PA 18618, or The Alzheimer’s Association, 57 N. Franklin Street, Wilkes-Barre, PA 18701.

Online condolences may be made by visiting Donald’s obituary at www.natandgawlas.com.