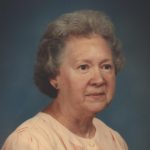 Dorothy was born in Wilkes-Barre, a daughter of the late Richard F. and Grace B. Evans Albrecht. She was a graduate of G.A.R. Memorial High School, class of 1943. Prior to her retirement, she had been employed as a salesperson at Woolworth’s Department Store in Wilkes-Barre.

She was a member of St. Mark’s Lutheran Church in Wilkes-Barre, where she was also an active member of the cookie baking group.

A Graveside funeral service will be held on Wednesday at 1 pm in Hanover Green Cemetery, 689 Main Road, Hanover Township.  The Rev. Mary E. Laufer will officiate.