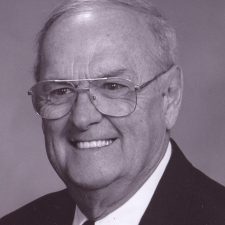 Edward M. McLaughlin, Ph.D., 85, of Wilkes-Barre, passed away on Tuesday at the Meadows Nursing and Rehabilitation Center, Dallas.

He was born in Wilkes-Barre, a son of the late Edward and Josephine Haggerty McLaughlin. He received his BA in Economics in 1955 from King’s College, an MBA in Information Systems Technology in 1985 from Marywood University and a Ph.D. in Workforce Development from Penn State University in 1998.

Dr. McLaughlin started his career in education in the Montgomery County School system in Maryland as a junior high school teacher. From 1956-1959 he was employed by the NSA as a code breaker involving top secret material in Fort Meade, MD. He was then employed by Honeywell Inc., implementing the first organizational-wide computer system, including working 3 years in Australia. Dr. McLaughlin became involved in Luzerne County government as Director of Data Processing, implementing the first computer system. From 1969-1978, he was the Business Manager for the Wyoming Valley Sanitary Authority and later served as the Executive Director of the Mountain Top Sanitary Authority.

Dr. McLaughlin then returned to education from 1981-1999, when he served as Academic Dean at Luzerne County Community College, beginning such programs as Nursing and Aviation. He later served as a faculty member at both Marywood University and King’s College in the Business programs.

Dr. McLaughlin and his late wife, Irene, loved to travel and had visited 23 countries. He most recently traveled by train across the country to visit his daughter in Oregon.

He was preceded in death by his wife, Irene M. Loftus McLaughlin on February 16, 2012.

Funeral services will be held on Friday at 9:30 AM from the Nat & Gawlas Funeral Home, 89 Park Avenue, Wilkes-Barre, followed by a Mass of Christian Burial at 10 AM in St. Andrew Parish, 316 Parrish Street, Wilkes-Barre. Interment will be in St. Mary’s Cemetery, Hanover Township.

Friends may call on Thursday from 6-8 PM at the Nat & Gawlas Funeral Home.

Online condolences may be made by visiting Dr. McLaughlin’s obituary at www.natandgawlas.com.