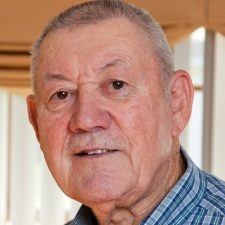 Ed was born on February 21, 1932, in Wilkes-Barre. He was the son of the late Raymond and Anna Kaczmarek. He is a 1949 graduate of Coughlin High School.

He proudly served his country as a Sergeant in the U.S. Army during the Korean War and, after an honorable discharge, worked as a milkman for Purvin Dairy, of Wilkes-Barre, for 13 years. His remaining working career was with the U.S. Postal Service until his retirement.

Ed’s passion was gardening. He achieved the status of Master Gardener and all his friends and neighbors can attest to his generosity as he gave away most of what he grew. He loved his Phillies and Eagles and he was an avid Penn State fan. He was so proud of his fruit orchard and enjoyed fishing every chance he got.

Edmund has been married to the love of his life, Evelyn Casper, for 64 years. They enjoyed many years of polka dancing, listening to Elvis, traveling and spending time with their beloved family.

Ed is a member of St. Jude’s Church, in Mountaintop.

Edmund was preceded in death by an infant brother Raymond and his brother Bernard Kaczmarek.

Edmund was a devoted father, brother, grandfather and friend, and will be greatly missed.

The family of Edmund wishes to express special thanks for all the genuine heartfelt care and support he received from Residential Hospice, the great staff at Smith Nursing Facility in Mountaintop and the Veteran’s Administration.

A Mass of Christian Burial will be held at 10 am on Monday in St. Jude Church, 420 S. Mountain Blvd. (Rte 309), Mountain Top.  Family and friends attending the Mass are asked to go directly to the Church on Monday.

Online condolences may be sent by visiting Ed’s obituary at www.natandgawlas.com.