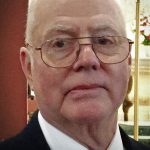 Ed was born in Wilkes-Barre, a son of the late Edward J. and Marie Ott Staab. He was a graduate of Meyers High School and Wilkes-Barre Business College. Prior to his retirement, Ed was employed as an O.EC.D. Labor Compliance Officer for the City of Wilkes-Barre. He had previously worked at Consolidated Cigar Company.

Ed served as Reservist in the U.S. Army.

Ed was a member of St. Nicholas Church, S. Washington Street, Wilkes-Barre, where he sang in its choir. He was also a member of St. Conrad’s Young Men’s Society, Misericordia University Community Choir. Ed was an Eagle Scout and served as an Assistant Scoutmaster with Boy Scouts of America, Troop 77, Wilkes-Barre.

In addition to his parents, he was preceded in death by a brother, Robert G. Staab.

Funeral services will be held on Tuesday, April 6, 2021, at 9:30 AM from the Nat & Gawlas Funeral Home, 89 Park Avenue, Wilkes-Barre, with a Mass of Christian Burial to follow at 10 AM in St. Nicholas Church, 226 S. Washington Street, Wilkes-Barre. Interment will be in St. Nicholas Cemetery in Shavertown.

Friends may call on Monday from 6-8 PM at the funeral home. Those attending the visitation and service are required to wear a mask and abide by social distancing requirements.

Condolences may be sent by visiting Ed’s obituary at www.natandgawlas.com.