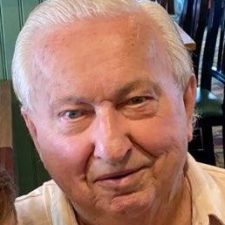 Edward Mera (Eddie), age 90, of Hanover Township, passed away peacefully on Tuesday evening, as his loving daughter held his hand and sang to him.

He was born in Nanticoke on October 16, 1931, a son of the late Thomas and Agnes Waltos Mera.  Ed was a graduate of Nanticoke High School, attended Empire Cosmetology School and Wilkes University. He was also a licensed insurance agent and a licensed realtor.

Prior to his retirement, he held many interesting jobs. He worked for Metropolitan Life, the Wyoming Valley Sanitary Authority, and served as the Township Manager for Hanover Township. After his retirement from full-time employment, he used his attributes of patience and kindness and his love of children to work part-time for many years as a school bus driver.

Ed was a member of St. Robert Bellarmine Parish at St. Aloysius Church in Wilkes-Barre. He was a proud, highly decorated veteran of the Korean Conflict where he served his country  as a medic in the Army.  He was a member of the  VFW, where he served in many capacities, including as the Commander. He was a proud member of the Military Order of the Cooties, the national honor service organization for officers and leadership of the VFW. He also was a member of the American Legion.  For many years, he played Santa Claus at the VFW and American Legion Christmas parties. He loved politics and served locally  as the Chairman of the Republican Party.  He was a passionate gardener, he loved opera, he loved to read, and he loved to travel and to play cards and be surrounded by friends and family. He was humorous and always had a twinkle in his eye and some change in his pocket for those in need. He was a devoted family man and the best father and husband. He adored his brothers and sister, and his nieces and nephews  and considered them to be some of his closest friends.

His greatest love in life was serving others and taking care of the people in his life in the best ways possible. A charming and pleasant individual, Eddie wanted everyone to be happy, and he was the first to step up and help anyone in need.  Whether by providing physical labor, financial assistance, gifts, encouragement, a sounding board, or even just a distraction from problems, Eddie was always willing to give of his time, talents, and money if it could help make the life of someone he loved better.  He was even giving at the end, when holding on until his loved ones could visit to say goodbye, and giving his daughter a final moment of alone time and love, like they had shared all of their lives.

He was preceded in death by his wife of almost 60 years, Jeannette, and his brothers, John, Thomas, Steven, Stanley, and Walter Mera.

Eddie is survived by and will be sorely missed by his daughter and best friend with whom he spoke with daily, Maryann Rossi and her husband Stephen, of Leesburg, VA, whom he thought of and loved like a son, his grandson whom he loved with a passion and always helped to guide, Jonathan Rossi, and his fiancée, Dr. Zoë Vesley-Gross of Ardmore, PA, his great grandson, Miles Rossi, who he thought was the smartest, kindest little boy he had ever met, his brother Joseph Mera of Hanover Township who was his best buddy and his political ally, and his sister Mary Fromel of Hanover Township who invited him to dinner every day after his wife passed away, and was his casino companion. He will be greatly missed by his godson and his wife, Robert and Tanya Vishneski of Pittsburgh, PA who always called him and stopped by to visit with him and share great stories and laughter. He will be sorely missed by his many nieces and nephews whose company he always enjoyed, including his goddaughter, Dr. Maria Mera, who cared for him until the end of his life.  Every one of these people will continue to take his wisdom, kindness, humor, and love with them into the world..

A Mass of Christian Burial will be held at 10:00 a.m. on Saturday, August 20th at St. Robert Bellarmine Parish at St. Aloysius Church at the corner of Barney and Division Streets in Wilkes-Barre.  Interment will be in St. Mary’s Cemetery, Hanover Township.

Family and friends may visit from 9:00 to 10:00 a.m. on Saturday at the church preceding the mass.

In lieu of flowers, donations may be made in Eddie’s memory to the Veterans of Foreign Wars.

Online condolences may be sent by visiting Eddie’s obituary at www.natandgawlas.com.