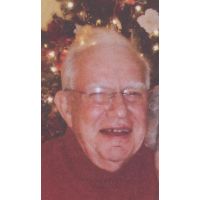 Edwin was born on March 30, 1926, the son of the late Edwin L. Sr. and Caroline Conrad Smith. He was a graduate of G.A.R. Memorial High School, class of 1944. Edwin was a U.S. Army veteran, serving during WWII.

Edwin was a member of St. Thereseâ€™s Church in Shavertown and a member the Wilkes-Barre Knights of Columbus Council 302 and he was a 4th Degree member of the Bishop Hafey Assembly.

Edwin was preceded in death by his wife of 68 years, Anna L. Smith on October 8, 2015 and by his son-in-law, Joseph Mengeringhausen.

A Mass of Christian Burial will be held today, March 29, 2016, at 11 am in St. Thereseâ€™s Church, Pioneer Avenue and Davis Street, Shavertown. The Rev. James J. Paisley will officiate. Private interment will be in Oak Lawn Cemetery, Hanover Township. Friends may call today from 10:30 am to 11 am at the church.

In lieu of flowers, memorial contributions may be made to St. Thereseâ€™s Church, 64 Davis Street, Shavertown, PA 18708