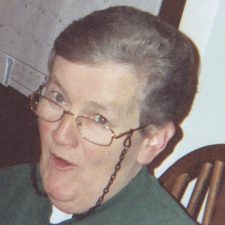 Ellen Eileen Spangenburg, 75, of Wilkes-Barre, passed away on Monday in Residential Hospice at Geisinger South Wilkes-Barre.

She was born in Wilkes-Barre, a daughter of the late Francis and Margaret Dunleavy Connell.  Eileen was a 1961 graduate of St. Mary’s High School and a 1965 graduate of College Misericordia, where she received her bachelor’s degree in music education.

Eileen was formerly employed as a music teacher in Baltimore County, MD and as a substitute teacher for the Wilkes-Barre Area School District.  She served for many years as an organist for several local churches, including, St. Patrick’s Church, St. Boniface Church, Holy Saviour Church, all of Wilkes-Barre, and St. Faustina’s Parish in Nanticoke.

Funeral Services will be held on Friday at 9:30am from the Nat & Gawlas Funeral Home, 89 Park Avenue, Wilkes-Barre, with a Mass of Christian Burial to follow at 10 am in St. Andrew’s Parish, 316 Parish Street, Wilkes-Barre.  Interment will be in St. Mary’s Cemetery, Hanover Township.

Friends may call on Thursday from 4 – 7 pm at the funeral home.

Online condolences may be sent by visiting Eileen’s obituary at www.natandgawlas.com.