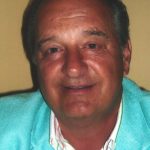 Emanuel (Manny) Mihalos, 74, of Wilkes-Barre, passed away on Friday, December 18, 2020 at the Wilkes-Barre General Hospital.

Manny was very active in his community. He was an associate professor of accounting at King’s College, Marywood University and Bloomsburg University. He served on the former boards of The Children’s Service Center, Wyoming Valley Country Club, UNICO and the Wilkes-Barre Municipal Authority.

He was a member of St. Robert Bellarmine Parish at St. Aloysius Church in Wilkes-Barre. He was also a member of the Wyoming Valley Country Club and the American Institute of Certified Public Accountants (AICPA).

Manny was an avid golfer and a diehard New York Giants fan. He enjoyed traveling to Las Vegas, Palm Springs, the Caribbean, Atlantic City and spending winter months golfing with his wife, Marie in Florida. He especially cherished spending time with his granddaughter, Alexa.

Manny was a devoted and loving, husband, father and grandfather.  He loved spending time with his family and looked forward to dog sitting his grand dog, Bosco.

Due to Covid-19, a private funeral service will be held at the convenience of the family.

A public celebration of Manny’s life and Mass of Christian Burial will be held at a later date.

Condolences can be sent by visiting Manny’s obituary at  www.natandgawlas.com.