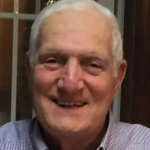 Eugene P. Perrella, 84, of Plains Township, passed away on Friday, April 24, 2020, at the Wilkes-Barre General Hospital.

Gene was born in Wilkes-Barre, a son of the late Silvio and Adeline Finarelli Perrella. He attended St. Mary’s High School in Wilkes-Barre.  Gene proudly served with the U.S. Navy during the Korean War and was a recipient of the Purple Heart. He was self employed as a hairdresser and later as a painter and wallpaperer, prior to his retirement.

Gene was a member of St. Barbara Parish in Exeter.

In addition to his parents, he was preceded in death by his brother, Silvio (Nick) Parrella; his sister, Rosemary Arzente and her husband, George Arzente.

Gene’s wife and family would like to thank the staff at the Wilkes-Barre General Hospital for their compassionate care.

Funeral services will be private at the convenience of the family. There will be no calling hours.   A public celebration of Gene’s life and a Memorial Mass will be held at a later date.

Entombment will be in the Mary Mother of God Mausoleum at St. Mary’s Cemetery, Hanover Township.

In lieu of flowers, memorial donations can be made in Gene’s name to the Medical Oncology Associates Prescription Assistance Fund, 382 Pierce Street, Kingston, PA 18704 or to the charity of the donor’s choice.

Online condolences can be sent by visiting Gene’s obituary at www.natandgawlas.com.