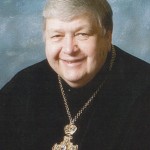 Archimandrite Frank J. Milienewicz, beloved pastor emeritus of St. George Melkite Greek-Catholic Church in Birmingham, Alabama, fell asleep in the Lord on the evening of Wednesday, December 11, 2019, at the age of 72.

Born in Wilkes Barre, Pennsylvania on June 30, 1947, he was the only child of the late Frank and Anna Milienewicz. Father Frank received his Bachelor’s Degree in Philosophy from St. Paul’s College in Washington, D.C., and studied theology at St. Basil Seminary in Stamford, Connecticut.

Father Frank faithfully served parishes of the Melkite Church in America for over 40 years.  He served as administrator of Our Lady of Perpetual Help in Wooster, Massachusetts (1976-1981), and as pastor of St. George in Milwaukee, Wisconsin, (1981-1986), St. Joseph in Lansing, Michigan (1987-1988), and St. George in Birmingham, Alabama (1988-2017).  During such time, he also served in numerous positions for the Diocese, including the College of Consulting, the Personnel Board, Proto Presbyters of Southern Region, the Insurance Council and as a Spiritual Advisor for the National Association of Melkite Youth (NAMY).  After retiring on his 70th birthday in 2017, Frank Frank continued to serve as pastor emeritus and attend divine services at St. George Church as his health permitted.

He is survived by his aunt, Sister Nivette Milienewicz, Reading; his cousin, Joan Navin, Mountain Top; several nieces and nephews and countless spiritual children.  Father Frank was greatly appreciated for his practical and loving spiritual guidance, and for his faithful stewardship of his church parishes.

Local Services will be held on Thursday, December 19th at 10 am from the Nat & Gawlas Funeral Home, 89 Park Avenue, Wilkes-Barre.  Rev. Justin Rose of Birmingham, AL, Rt. Rev. John Azar of Atlanta, GA and Rev. Christopher Manuaele of Scranton will officiate. Interment will be in St. Joseph’s Cemetery, Duryea.

Family and friends may call on Thursday from 9 -10 am at the funeral home.

In lieu of flowers, memorial contributions can be made to the Building Fund of St. George Melkite Greek-Catholic Church, in Birmingham, Alabama.

May Father Frank’s memory be eternal!

Online condolences may be sent by visiting Father Frank’s obituary at www.natandgawlas.com.