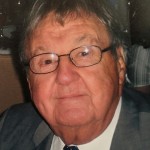 Francis was an active member of St. Nicholas Roman Catholic Church in Wilkes-Barre, where he would regularly volunteer as an usher.

Francis, Frank, Honey, Darling, Dad, Papa, Chotty, Uncle Francis was loved by all who knew him. He loved to socialize with family and friends, always telling his jokes to the crowd’s delight. He was thrifty, loved to cook, bake, grocery shop and travel, especially to the beach. We will always carry your memory in our hearts. You will be missed.

In addition to his parents, Francis was preceded in death by his daughter, Judith Naples, and by his siblings, John Balas, Josephine Yarrish, Joseph Salonick, Helene Pendzinski and Carl Salonick.

Due to the Covid-19 Virus funeral services will be private and for the immediate family. There will be no calling hours. A Mass of Christian Burial to celebrate Francis’s life will be held at a later date.

In lieu of flowers, memorial donations may be made in Francis’s name to St. Nicholas Church, 226 South Washington Street, Wilkes-Barre, PA 18701.

Online condolences can be sent by visiting Francis’s obituary at www.natandgawlas.com.