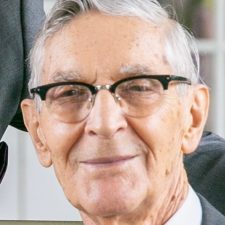 Francis C. Bekampis, 96, of Ashley passed away peacefully on Monday March 21, 2022 at home with his wife, Gertrude and dog, Brady by his side.

He was born in Wilkes-Barre to the late Charles and Anna Ferris Bekampis.  Francis graduated from G.A.R. High School and Penn State University. He served in the U.S. Navy as Radioman 3rd class in Hawaii during World War II.

Francis was employed at Pethick Construction, Plains Twp. and then Twin City Builders as an estimator/ project manager.  He was a very active member of St. Leo the Great Parish, Ashley, where he served as a lector and member of the Holy Name Society.  He volunteered at the church bazaar in the summer and assisted with the preparation of Lenten meals. He was also a member of Knights of Columbus, council 12089 and their 4th Degree Assembly, Ashley.

Francis was preceded in death by an infant son, Thomas and his sister, Dorothy Kauczka.

Online condolences can be made by visiting Francis’s obituary at the funeral home website www.natandgawlas.com