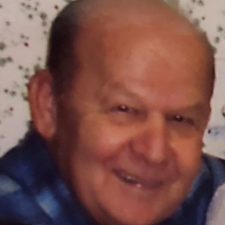 Frank was one of 13 children, born to Edward and Cecelia Zaledonis Lanning.  A former resident of Georgetown, he made his home in Kingston, PA.

He was a 1954 graduate of Coughlin High School. Frank entered the Air Force in 1954 and was an Airman A/1C First Class and worked as a Radio Operator. He fought in the Korean War, received a Good Conduct Medal and was honorably discharged in 1962. He then was employed with Central Slipper and later worked for and retired from HPG International Inc. of Mountaintop in 2001.

Being one of 13 children enabled Frank to be a survivor. As a maker of mischief and keeper of secrets he was able to evade getting into trouble and stay ahead of the brood. Frank was the “funcle” who took his nieces and nephews on late night pizza and McDonald’s runs, rafting down the Lehigh River and trips to the beach. He also could shake money out of the one and only “money tree” in the Lanning backyard.  We will always remember and be afraid of the supposed “wolf” he lovingly called “Lobo” that lived in his basement.  Frank loved to visit the Pierce Street Deli daily, where he enjoyed breakfast and the good company of his friends. He was a kind man, gentle soul and a faithful friend to all who knew him. He was well respected and loved by his family and his peers.

Surviving are his sister-in-law, Joan Lanning of Darien, Ill. and a host of nieces and nephews who will cherish his memory and will miss him dearly.

Frank received instrumental care and compassion from the staff of Kingston Manor and Allied Hospice of Wilkes-Barre. Special TLC was provided by his niece and nephew Joe and Sharon Lanning Kozlowski.

A graveside memorial service will be held on Monday, April 4th, 2022, at 10:00am in St. Mary’s Cemetery, Hanover Township.  Frank would appreciate it if you enjoyed a “Pepsi” in his honor as you remember him.

Condolences can be sent by visiting Frank’s obituary at www.natandgawlas.com.