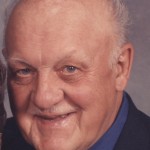 Frank A. Yuknavich, 89, of Wilkes-Barre Township, passed into the arms of our Lord on Wednesday, September 19th at his home.

He was employed from a young age by his family’s Shurfine grocery business and upon his father’s passing carried on the business with his wife, Mary, until the store’s closing.  He was employed as a part time Wilkes-Barre Township Police Officer, by Martz Trailways and later until his retirement by United Parcel Service making his nightly runs to Syracuse, NY.  Frank was honored by the United Parcel Circle of Honor for his completion of a million miles of safe driving.

He had a passion for fishing and hunting, enjoying his fishing trips to Canada with his sons, his nephews and friends.  He enjoyed his weekends watching football especially Penn State.

In addition to his parents, he was preceded in death by his brothers, Joseph, Walter and Anthony and by his sisters, Jule Havira, Anne Crake and Margaret Crake.

Frank is survived by the love of his life his wife, Mary (Jump-Giampa), with whom they were blessed with 63 years of marriage; daughter, Mary Joy and her husband William (Butch) Allen, son, Jerry and son, John Paul and his partner, Dorothy Maloney all of Wilkes-Barre Township; grandchildren, Jason Allen, Amy Spadafore and her husband, Joseph and William (Billy) Allen, Stacey Yuknavich and her partner, Shawn Ebert, Glenn Yuknavich, Lacey and John Paul Yuknavich Jr.; great grandchildren, Dalano Yuknavich, Joseph and Luciana Spadafore; nieces and nephews; and his beloved dog, Honey, who was always by his side for the past 13 years.

Our family is forever grateful to Dr. Sandhya Desai, who was so caring and compassionate during his time under her care and Allied Hospice, especially nurse, Megan for the care and compassion shown.  May God bless them both.

Friends may call on Sunday from 4-8 pm at the funeral home.

Online condolences may be sent to visiting Frank’s obituary at www.natandgawlas.com.