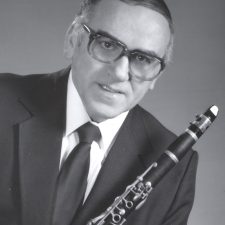 He was the son of the late Antoinette and Anthony Castrignano. Frank graduated from Meyers High School and earned a BS degree from East Stroudsburg University. He received his Master’s Degree in Elementary and Secondary Administration from the University of Scranton. He was employed by the Wilkes-Barre Area School district as a biology teacher at Coughlin High School and later as Vice Principal at Meyers and GAR High School.

Frank’s true love was music.  At the age of 15 he was a six time winner on the Ted Mack radio and television show. He was the lead clarinetist for 53 years in the Lee Vincent Orchestra. He also played with Bobby Baird’s Dixie Land Band, The Doug Smith Orchestra and more recently Jim Selingo’s Statesman. He was considered by many as one of the top jazz clarinetist in the area considering he backed up performers such as Frank Sinatra, Jerry Vale and many more.

He was preceded in his death are his parents and by his sister, Carolyn Novak.

Surviving are his children, Karen Trowbridge and her husband, William, Swoyersville, Dr. Frank Casty and his wife, Mary, McMurray and Dr. Gary Casty and his wife, Cheryl, Hellertown. Four grandchildren: Robert and Katie Casty; Will Trowbridge and Ashley Simpson and two great grandchildren, Justus and Jaiden. He is also survived by his sister, Manny Warke, Wilkes-Barre; and by his niece and nephew.

Friends may call on Monday from 11 am to noon at the funeral home.

Online condolences may be sent by visiting Frank’s obituary at www.natandgawlas.com.