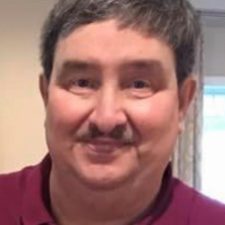 Frank Koslosky, 58, of Wilkes-Barre, passed away on Sunday, May 31, 2020, at Wilkes-Barre General Hospital with his loving wife and children by his side.

Frank was born in Wilkes-Barre, the son of the late Frank and Helen Dubaskas Koslosky. He was a graduate of Coughlin High School, Class of 1980. Frank served in the United States Army from 1983-1989. He was proudly employed as a correctional officer by the Pennsylvania Department of Corrections at the former State Correctional Institute Graterford and he was later employed as a security guard at King’s College.

Frank was known by his family and friends for his comedic relief, always coming up with unique nicknames for everyone, even if unsolicited. He was the life of the party who never failed to make you laugh with his witty one liners. His sense of humor, story- telling, and light- hearted attitude will be greatly missed.

He had a love for old country westerns, the beach, vanilla ice cream (always a large), the Pittsburgh Steelers and NY Yankees, and sitting on the front porch “people watching” while listening to his police scanner. His strongest love was and will always be for his wife “Peg”. She was his caretaker, best friend, confidant, and soul mate. As a couple they would often enjoy date nights at Beer Boys where he had built a rapport with fellow patrons and staff. Franks children and grandchildren were his pride and joy, with his two dogs, Fudge and Cloe coming in at a close second.

Frank was preceded in death by his parents.

Funeral services will be private and held at the convenience of the family. There will be no public calling hours. A public celebration of Frank’s life will be held at a future date.

Interment will be in St. Mary’s Cemetery in Hanover Township on Thursday at 11a.m. Close friends and family may join at the graveside service.

Memorial Donations can be made to the Wounded Warriors Project in Frank’s honor.

Online condolences can be sent by visiting Frank’s obituary at www.natandgawlas.com.