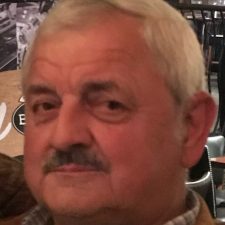 Fred Dotzel, 71, of Bear Creek passed away August 19, 2022 surrounded by his loving family after a courageous battle with cancer.

Born in Wilkes-Barre Township, he was the son of the late Fred Dotzel Sr., and Regina Lavan Dotzel.

He was a 1969 graduate of Wilkes Barre Twp.  Fred was U.S. Marine veteran serving during Vietnam. Fred was a self-employed contractor owning his own business, Dotzel Painting.

Fred enjoyed many hobbies.  He was a great outdoorsman who enjoyed hunting and especially fishing. He was always there to lend a hand for family and friends.  Everyone who knew Fred, has a great story to tell about him. Those who stay behind will remember a larger-than-life personality who can tell a story like no other.

Funeral Services will be held on Tuesday at 7:00 P.M. at the Nat & Gawlas Funeral Home, 89 Park Avenue, Wilkes-Barre, with Deacon William Behm officiating.

Relatives and friends are invited to call on Tuesday from 4:00 P.M. until time of service.

Online condolences may be sent by visiting Fred’s obituary at www.natandgawlas.com.