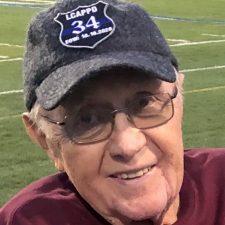 Fred J. Buss, 77, of Wilkes-Barre passed away on Monday, December 27, 2021 at the Geisinger Wyoming Valley Medical Center in Plains Township.

He was born in Wilkes-Barre, a son of the late Leonard and Marion Bray Buss.  Fred was a graduate of G.A.R. Memorial High School, class of 1961, where he was a star football player and wrestler.  After high school, Fred attended college at Wichita State on a football scholarship.

Prior to his retirement, he was employed for many years as an insulator with the Heat & Frost Insulators Union, local 38.

A visitation for family and friends will be held from 12- 2 pm on Monday at the funeral home. Fred’s family requests that masks be worn for the visitation and the service.

Condolences may be sent by visiting Fred’s obituary at www.natandgawlas.com.