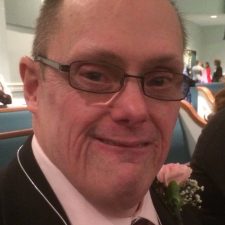 Gerald “Jerry” Mashinski Jr., 59, of Unityville, formerly of Wilkes-Barre, passed away on Sunday morning at his home.

He was born in Wilkes-Barre on May 7, 1960, a son of the late Gerald and Ann Kosek Mashinski Sr.  Jerry was a 1981 graduate of Coughlin High School.  He was formerly employed by URS.

He was a member of St. Nicholas Church in Wilkes-Barre, where he served as an Altar Server.

Jerry was a very special person. He was the number one uncle and the number one brother, who will be sadly missed by his brothers, sisters and his entire family.

In addition to his parents, he was preceded in death by his brothers, John and Charles Mashinski.

Family and friends are invited to attend a Mass of Christian Burial on Friday at 10 am in St. Nicholas Church, 226 S. Washington Street, Wilkes-Barre. Interment will be in St. Mary’s Cemetery, Hanover Township.

Online condolences may be sent by visiting Jerry’s obituary at www.natandgawlas.com.