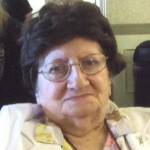 Harriet J. Ciampi, 95, a resident of Tiffany Court in Kingston formerly of Wilkes-Barre, passed away on Thursday at the Wilkes-Barre General Hospital.

She was born in Kingston a daughter of the late Harry and Kathryn Warkle McAffee.  Harriet attended Kingston High School.  She was formerly employed as a seamstress in the local garment industry.

Her family meant everything to her. Harriet was a loving and devoted wife, mother, sister and aunt, who will be sadly missed by her family and friends.

Harriet was preceded in death by her husband, Dominic Ciampi, in 1987 and by her brothers, Robert, Walter & Donald McAffee; sisters, Gladys Jean Moore, Edna West and Kathryn ‘Kitty’ Simpson.

Surviving are her children, Robert Ciampi, Wilkes-Barre and Carolyn Korus and her husband, Martin, Larksville.  She is also survived by her brother, Carl McAffee and his wife, Glenna, Douglasville, PA; and her nieces and nephews.

Funeral Services will be held on Monday at 10 am from the Nat & Gawlas Funeral Home, 89 Park Avenue, Wilkes-Barre. Deacon Joseph DeVizia will officiate.  Interment will be in Chapel Lawn Memorial Park, Dallas.

Friends may call on Monday from 9-10 am at the funeral home.

Online condolences may be sent by visiting Harriet’s obituary at www.natandgawlas.com.