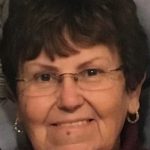 Henrietta A. Valenti, 76, of Wilkes-Barre, passed away on Tuesday at the Geisinger Wyoming Valley Medical Center, Plains Township, surrounded by her loving family.

She was born in Wilkes-Barre, a daughter of the late Max and Mary Diorio Gonzalez.  She was a graduate of G.A.R. Memorial High School and the IBM Business School.

Henrietta was formerly employed as a secretary for the Brewery Workers Union and she was later employed for 48 years as the parish secretary at Holy Rosary Church in Wilkes-Barre.

She was a member of Our Lady of Fatima Parish at St. Mary’s Church of the Immaculate Conception, Wilkes-Barre.  Prior to its closing she had been a member of Holy Rosary Church and its Sacred Heart & Rosary Society.

Henrietta was a loving and devoted wife, mother, sister and aunt.

Private funeral services with a Mass of Christian Burial will be held at the convenience of the family.  Interment will be private.  There will be no public calling hours.

In lieu of flowers, memorial contributions may be made to the SPCA of Luzerne County, 524 East Main Street, Wilkes-Barre, PA 18702.

Condolences may be sent by visiting Henrietta’s obituary at www.natandgawlas.com.