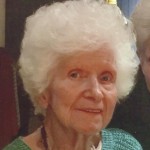 Jacqueline Victoria Skibicki, 82, of Hanover Township, who resided at Kingston Manor Personal Care, passed away on Sunday at Hospice of the Sacred Heart in Dunmore.

She was preceded in death by her loving husband of 56 years, Leonard Skibicki, together they spent many years traveling together.

Jacqueline is survived by her only child, Judith Kell, who was a precious part of her life.  Jacqueline was very close to her brother, Gordon Pisack and his wife, Marie of Wilkes-Barre. She is also survived by her sister-in-law, Vera Skibicki, Wilkes-Barre and by many cousins and several nieces and nephews.

Jacqueline’s daughter, Judy, would like to thank the staff and doctors at Tiffany Court in Kingston, Kingston Manor Personal Care and Hospice of the Sacred Heart in Dunmore for their compassionate care.

A Mass of Christian Burial will be held on Friday at 10 am in St. Robert Bellarmine Parish at St. Aloysius Church, Barney and Division Street, Wilkes-Barre.

Family and friends may call at the Church on Friday from 9 – 10 am.

Online condolences may be sent by visiting Jacqueline’s obituary at www.natandgawlas.com.