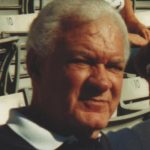 Jim was born in Kingston, a son of the late Andrew and Marie Shelley Mihal. He was a graduate of Kingston High School, Class of 1952, where he was an all- scholastic football player and district wrestling champion.  Jim also participated in the Penn Relays in Philadelphia as an athlete.

Jim served with the Merchant Marines. Prior to his retirement, Jim had been employed as a truck driver by the A. Wilson & Company.

Jim was a loving and devoted husband, father and grandfather. He was an avid Penn State Football and NY Yankees fans.

Jim was preceded in death by his granddaughter, Marissa Mihal, and by his sister, Marie Telfer.

Due to Covid-19 a private funeral services will be held at the convenience of the family. There will be no public calling hours.

A public celebration of Jim’s life will be held at a later date.

Condolences can be sent by visiting Jim’s obituary at www.natandgawlas.com.