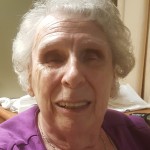 Janet Malone, 80, of Wilkes-Barre, passed away on Sunday at Allied Center City Skilled Nursing in Wilkes-Barre.

Born in Wilkes-Barre, she was a daughter of the late John and Violetta Daubert Eroh.  Janet was a graduate of Meyers High School.

Prior to her retirement, Janet was employed as a nurse’s aide at Little Flower Manor and at the Heritage House in Wilkes-Barre.

She was a member of St. Andrews Parish in Wilkes-Barre.

Funeral services will be held on Thursday at 9:30 am from the Nat & Gawlas Funeral Home, 89 Park Avenue, Wilkes-Barre, with a Mass of Christian Burial to follow at 10 am in St. Andrew Parish, 316 Parrish Street, Wilkes-Barre.  Entombment will be in St. Mary’s Cemetery, Hanover Township.

Friends may call on Wednesday evening from 5-7 pm at the funeral home.

Online condolences may be sent by visiting Janet’s obituary at www.natandgawlas.com.