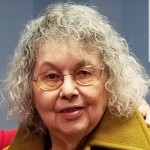 Jeanenne Marie Knecht (Perkosky), 74, of Wilkes-Barre, was welcomed into the light of heaven on Tuesday, November 13, 2018.  She passed peacefully in the comforts of home with her 4-footed babies at her side.  Jeanenne, the daughter of the late Joseph and Mary Perkosky, was born on Nov. 24, 1943, in Wilkes-Barre.

She was a graduate of G.A.R. Memorial High School, class of 1961.  While in school she was a member of the Garchoir and yearbook staff.  She worked in production at RCA, Mountaintop, the former Insalaco’s and did telemarketing with the Citizen’s Voice.

But of all her jobs, she worked hardest and was best at being a mother.  As a single parent, she did her best to provide for her children and to show us every day that we were loved.  Her greatest joy however was being a “Grammy.” Passing along her wisdom, sharing stories, and simply spending time with her family became one of her favorite things to do.  Jeanenne also loved her dogs and was never without one close by.  She enjoyed country music (her favorite being “her Blakey” Shelton), sour gummy worms, Hallmark movies, Cracker Barrel, and getting lost in her issues of Victoria and Romantic Homes.  Her caring soul and loving heart will never be forgotten — Neither will her sarcasm, stubbornness, or hatred of closed-in shoes.

She was preceded in death by her parents and sister, Carole Ann Jones.

Funeral Services will be held on Saturday at 11 am from the Nat & Gawlas Funeral Home, 89 Park Avenue, Wilkes-Barre.  Deacon Francis Bradigan will officiate.  Interment will be in St. Mary’s Cemetery, Hanover Township.

Friends may call on Friday from 5 – 8 pm at the funeral home.

In lieu of flowers, memorial donations may be made to the SPCA of Luzerne County, 524 East Main Street, Wilkes-Barre, PA  18702.

Online condolences may be sent by visiting Jeanenne’s obituary at www.natandgawlas.com.