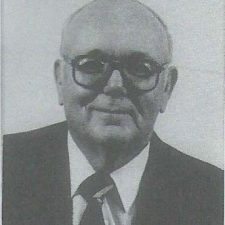 Coach John D. Rowlands, 80, of Wilkes-Barre, passed away on Monday, March 21, 2022, at the Gardens at Wyoming Valley, Wilkes-Barre.

He was born in Wilkes-Barre, a son of the late John and Dorothy Davis Rowlands. John was a 1960 graduate of G.A.R. Memorial High School. He received his bachelor’s degree from Susquehanna University. Prior to his retirement, John was employed by the Wilkes-Barre Area School District as a teacher, football coach and athletic director at G.A.R.

John was actively involved in G.A.R. Sports for over 30 years. As a high school athlete, John earned eleven varsity letters. He was a three-year starting player and captain for the football team. He was a two-year high school wrestling team captain and a 1960 district wrestling champion. He was also a co-captain of the G.A.R. track and field team. John had been elected to the Head Coaches All-Team Team for three consecutive years. In 1959, he was selected to both the local All-Scholastic Football Team and to the All-State Football Team.

John was named the head football coach of G.A.R. Memorial High School, his alma mater, in 1970. As G.A.R.’s head football coach, John’s teams won many Wilkes-Barre City Titles, 6 consecutive Wyoming Valley Conference Division II Championship Titles, an undefeated season in 1976 with a State Championship Title, and a State Championship Title in 1978. John was honored as Coach of the Year several times and was selected as the Sunday Independent Coach of the Year for all sports. He was a three-time Unico Game Coach and a coach for the Big 33 All Star Classic. John served as a head track and field coach from 1973 through 1974. As the track and field coach, his teams won the Wyoming Valley Division II and the District Championship in both years that he coached. He left coaching in 1980 to become G.A.R.’s Athletic Director. John was inducted into the G.A.R. Wrestling Club’s Hall of Fame in 1982. In 1989, he was appointed Assistant Commissioner of the Wyoming Valley Football Conference. John’s long association with sports as an athlete, coach and administrator has produced nothing but admiration and success.

In addition to his parents, he was preceded in death by his brother, Robert W. Rowlands in 1990.

The family would like to thank the wonderful staff at The Gardens at Wyoming Valley in Wilkes-Barre for John’s care over the past year.

Funeral services will be held on Friday at 12 P.M. from the Nat & Gawlas Funeral Home, 89 Park Avenue, Wilkes-Barre, Pastor Chester Dudick and Pastor James Breese will officiate. Interment will be in Hanover Green Cemetery, Hanover Township.

Friends may call on Thursday from 4-7 P.M. at the funeral home.

In lieu of flowers, the family requests donations be made to a charity of your choice in John’s name.

Condolences can be sent by visiting John’s obituary at www.natandgawlas.com.