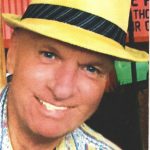 John (Jack) Richardson, 61, passed away comfortable, on Thursday, December 24, 2020 at his home in Wilkes-Barre, Pennsylvania. Jack was born July 6, 1959, to Arthur and Nancy Richardson in Madisonville, Pennsylvania, the third oldest of seven children. He graduated from Frew Mill High School in New Castle (Pittsburgh). Jack apprenticed as a welder during his high school years, and he kept and honed those skills throughout his life.

After high school, Jack served in the U.S. Navy as an Aviation Machinist Mate during his service. Soon after his honorable discharge from his military service in the Navy, he met his beautiful bride and future wife, Christine Marie London. He married Christine in Scranton, Pennsylvania, in November of 1979. They soon after had a daughter and named her Crystal Lee Richardson in 1981.

Jack was a loving father, husband, and friend to everyone.

He was most known by his family, friends, and acquaintances for his talents and abilities to do “quick fix tasks” for most everyone he knew. Jack was always there to help relatives and friends with any of their household projects related to carpentry, electrical, and plumbing issues. He was a genuine, “Jack” of all trades!

Although Jack acquired many ambitions, talents. And abilities throughout his young life, it was in 1986 that Jack began a lifetime career in the information technology industry. After moving himself and his family from Scranton to Wilkes-Barre, he dedicated himself to “climbing the corporate ladder” for the next 35 years at Berkshire Hathaway GUARD Insurance Companies.

He was tenacious and determined, and, although he started as “only” an Information Technology Trainee, he rose through the ranks over those 35 years to the top of his profession as the (CTO)—Chief Technology Officer. He also simultaneously held a role as the (DCISO)—Deputy Chief Information Security Officer during his tenure as the CTO. He maintained both of those roles until his retirement in 2020.

Over those same years of his career, Jack found the time to earn his FAA-Private Pilot’s License in 1992. Also, in 1992, Jack became and FAA Pilot Ground Instructor and conducted weekly pilot ground instruction at the Wilkes-Barre International Airport. Jack was a member in good standing with his local Civil Air Patrol unit based at the Forty Fort Airport. During his tenure with the Civil Air Patrol, Jack had the interest and opportunity to conduct several search and rescue missions. He was intimately involved with flying sorties for the U.S. Customs Counterdrug Reconnaissance Team as well as the Civil Air Patrol’s Humanitarian Services Team. Jack was also an adjunct instructor at the McCann School of Business teaching “Basic Principles of Information Technology” through the 1980s.

During Jack’s career, he developed many United States Patent and Trademark Office “technology-based patents” with him named as the principal inventor. Jack was considered a “top performer” in his profession, which led him to being an occasional “Guest Speaker” on technology issues at many nationally recognized conferences and committees. He was the lead participant in the keynote speech given at a variety of the PCIAA (Property Casualty Insurer Association of America) technology group conferences.

Jack was preceded in death by his older sister, Margaret and his father, Arthur. He is survived by his loving wife of 41 years, Christine and by his beloved, daughter, Crystal and mother, Nancy. Jack s also survived by his two brothers, Art and Stephen and his three sisters, Sharon, Patricia, and Nancy.

A special thank you to Dr. Richard Blum, Medical Oncology Associates and Dr. Bruce Saidman, and to the staff at Erwine Home Hospice in Kingston, PA, for their loving care and support during his final days. The family would also like to extend their sincerest gratitude toward the Nat & Gawlas Funeral Home for being very accommodating and understanding during this difficult time.

Condolences may be sent by visiting, Jack’s obituary at www.natandgawlas.com.