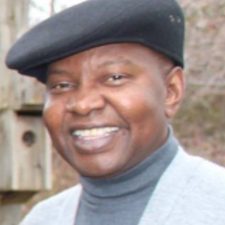 Born in Molo, Kenya, Africa, he was the son of Michael Kahiu Kibunja and the late Mary Wambui Kibunja.  He was a graduate of Nairobi School in Nairobi, Kenya. John then came to the United States and attended Misericordia University, where he received his bachelor’s degree in business.  He continued his education at Marywood University, where he earned an M.B.A .

John worked at Sallie Mae for 23 years in various positions, with his last position as a contract analyst.  He continued his quest to be an entrepreneur and entered into several business ventures.

He was a member of Our Lady of Fatima Parish at St. Mary’s Church of the Immaculate Conception in Wilkes-Barre.

John was loved by all who knew him. His smile and laughter were his best traits. He served as a sounding board for many, patiently listening to anyone who wanted to talk.  John enjoyed “shaking his legs”, which was his way of saying he loved to dance.  If you had the honor of being anointed with one of his famous nicknames, consider yourself special.

John loved his family more than anything.  He lived for his daughter, Amelia, granddaughter Myla Rose and his wife, Carmen.

In addition to his mother, he was preceded in death by a brother, Bernard K. Kahiu.

Funeral Services will be held on Saturday, June 15, 2019 at 9:00 am from the Nat & Gawlas Funeral Home, 89 Park Avenue, Wilkes-Barre, with a Mass of Christian Burial to follow at 9:30 am in Our Lady of Fatima Parish at St. Mary’s Church of the Immaculate Conception, 134 S. Washington Street, Wilkes-Barre.  Interment will be in St. Mary’s Cemetery, Hanover Township.

In lieu of flowers, donations may be made in John’s memory to St. Mary’s Church of the Immaculate Conception, 134 S. Washington Street, Wilkes-Barre, PA 18701 or to Misericordia University, University Advancement, 301 Lake Street, Dallas, PA  18612.