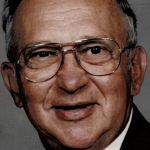 He was born in Wilkes-Barre, a son of the late John and Marie Shesko Saraka and of the late Margaret Zdancewicz Saraka.  Larry was a graduate of Edwardsville High School, class of 1949.  He then entered the U.S. Navy serving during the Korean War.  Following his service in the Navy he attended and graduated from Bloomsburg University, where he obtained his bachelor’s and master’s degrees in education.  He also attended Syracuse University and North Carolina State University.

He was preceded in death by his brothers, John and William Zdancewicz.

Private funeral services will be held at the convenience of the family, from the Nat & Gawlas Funeral Home, 89 Park Avenue, Wilkes-Barre.  Interment will be in St. Mary’s Cemetery, Hanover Township.

In lieu of flowers, donations may be made in Larry’s memory to the Sister’ s of Christian Charity, 350 Bernardsville Road, Mendham, NJ 07945 or to St. Joseph the Worker Church, 1879 Applewood Drive, Orefield, PA  18069.

Condolences may be sent by visiting, Larry’s obituary at www.natandgawlas.com