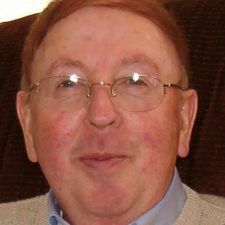 John P. Thomas, 82, of Mountain Top, passed away on Tuesday morning at Mountain Top Healthcare & Rehabilitation Center, from complications of the COVID 19 virus.  He has now returned to the loving arms of his wife, Karin.

John was born in Laflin, a son of the late Paul J. and Eva Shedlock Thomas. He was a graduate of Jenkins Township High School and King’s College. He served with the U.S. Army Reserves.

John started a T.V. and appliance business, John Thomas T.V. in 1958 and continued his business on North Main Street, Wilkes-Barre until 1978.  John was an entrepreneur and real estate developer who with his partner of nearly 40 years, Bob Zinn, developed and operated the Econo Lodge and Comfort Inn and Suites of Wilkes-Barre.  They also owned Rittenhouse Plaza in Drums, PA.  John with his partner George Morio developed Washington Park in both Mountain Top and Tunkhannock, PA.  John Built over 150 homes and most recently developed Summit View Plaza in Mountain Top, PA.

John grew up in the Shantytown coal mines, where he took up his father’s way of taking care of people.  He was a very humble man who greeted everyone with a broad smile and a handshake.  He strove for excellence in everything he did.  There was no question of the love and devotion for his family, especially his wife Karin, whom he missed dearly after her passing.

John was a devout Catholic and was a member of St. Jude Church in Mountain Top, where he served as an usher for 40 years, and also served on the finance committee.

John was a loving and devoted husband, father and Pop Pop. He enjoyed collecting cars. He also was an avid collector of coal mining memorabilia, where his finished basement was referred to as “Pop-Pop’s museum.  John also served on the Luzerne County Planning Commission and was an active member of the Kiwanis and Lions Clubs.

In addition to his parents, John was preceded in death by his wife, the former Karin E. Roskoski Thomas, on November 13, 2015; sisters, Anna Mae Thomas and Marie Seprish; brothers, Joseph and Frank Thomas; and infant brothers, Peter and Paul Thomas.

Funeral services will be private and will be held at the convenience of the family. There will be no calling hours.  A public celebration of John’s life and a Memorial Mass will be celebrated at a future date.

Interment will be in Calvary Cemetery in Drums.

Online condolences can be sent by visiting John’s obituary at www.natandgawlas.com.