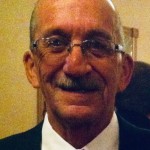 John W. Fitzmaurice Jr., 69, of Hanover Township, passed away on Tuesday, February 4th, surrounded by his family at the Kingston Health Care Center.

He was born in Philadelphia, a son of the late John William Fitzmaurice Sr. and Jean Grant Fitzmaurice.  John was a graduate of Monsignor Bonner High School, Drexel Hill, attended LaSalle University and earned an Associates Degree in Computer Operations.

Prior to his retirement, he had been employed as a data center supervisor for Altria.

John was a long time member of St. Nicholas Church in Wilkes-Barre, where he was a tireless worker every year for the church’s annual bazaar.

John was the ultimate Philadelphia Eagles Football fan and loved to play golf.  Most of all he was a loving and devoted husband, father, grandfather, brother, uncle and friend.  He will be sadly missed by all who knew him.

Funeral services will be held on Saturday at 9:30 am from the Nat & Gawlas Funeral Home, 89 Park Avenue, Wilkes-Barre, with a Mass of Christian Burial to follow at 10 am in St. Nicholas Church, 226 S. Washington Street, Wilkes-Barre. Interment will be in St. Mary’s Cemetery, Hanover Township.

The family would also like to extend a special thank you to the doctors and nurses at Commonwealth General Hospital, Wilkes-Barre, Good Shephard Rehabilitation Hospital, Muhlenburg, and Kingston Healthcare Center for their compassionate care during the months of his illness.